► co-organized between Laboratoire DANTE and the Journal of Regulation & Compliance (JoRC), this colloquium) is the core manifestation of the 2021 series of colloquia devoted to the general theme of Compliance Monumental Goals.

It will take place on 16th of September 2021, at the Maison du Barreau, in Paris.

This first work is in French but  will be the basis of the book in English : Compliance Monumental Goals,

This book will be published in the Compliance & Regulation Series, co-published by the JoRC and Bruylant.

► Presentation of the colloquium Thematic: To understand the notion of "Monumental Goals", it is firstly necessary to take crossed perspectives on them, particularly through the prism of Labor Law, Environmental Law and Enterprise Law. Many questions appear. Does the notion of “Monumental Goals” present any substance in Law? Is it uniformly understood, or do specificities appear, forged by specific cultures and disciplinary practices? What are the sources and implicit references or echoes? Because even if we admit the part of novelty, there is undoubtedly an anchoring in traditional legal concepts, like the general interest or sovereignty. How does the shift from meta-legal (prima facie introduced by the concept) to legal take place, and where do any operational difficulties lie when legal actors are called upon to act? The question of a possible categorization of "Monumental Goals" will thus be explored, through these three legal disciplines whose historicity, goals and implications for firms differ.

These reflections allow to ask why and how these "Monumental Goals" are developed. Indeed, what is the relevance of the association of "Monumental Goals" and Compliance? Beyond theoretical considerations relating to the meaning of Law, is this really an effective alloy encouraging companies to behave differently? By what ways? These questions arise in particular with regard to the imperatives of legal certainty and the operative nature of the concept. The question of "Monumental Goals" will thus be explored by the operational actors of compliance, both those who act within companies and those who act from the lato sensu State sphere, for understanding whether this notion is a pure rhetoric figure or constitutes a particularly promising lever for the evolution of market behavior. 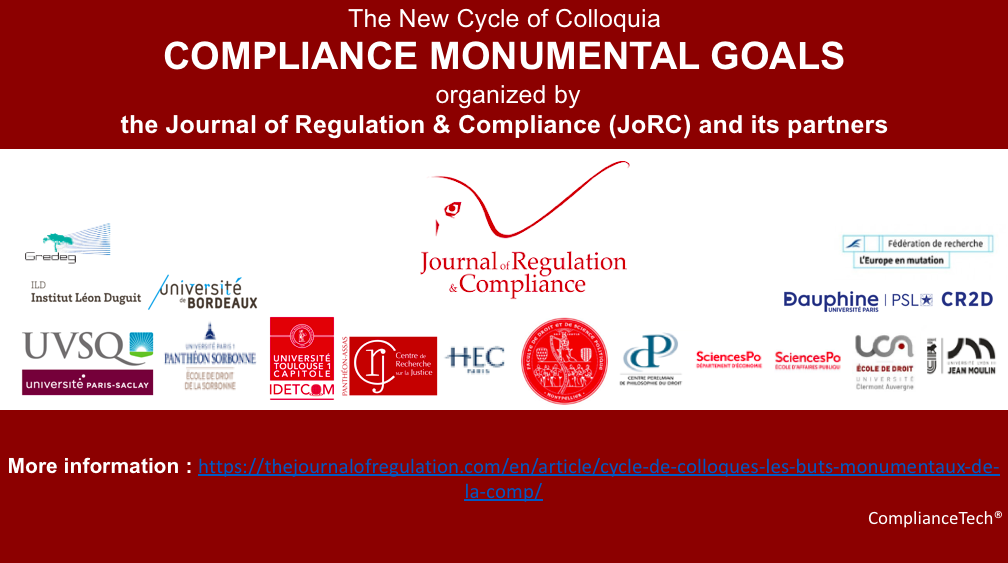 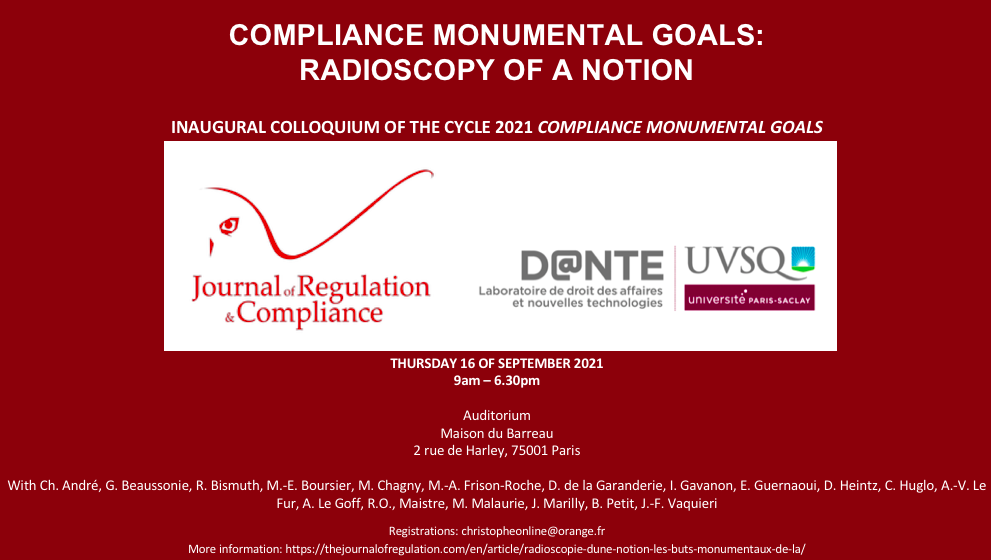 Read a detailed presentation below:

📝 Read the program of this colloquium (in French)

📝 Read the bilingual working paper on which this conclusion is based

📅 This colloquium is part of the Cycle of colloquium 2021 organized by the Journal of Regulation & Compliance (JoRC) and its partners around Compliance Monumental Goals.

📘 This manifestation is in French but the interventions will be part of an English collective book directed by Marie-Anne Frison-Roche, Compliance Monumental Goals, co-edited by the JoRC and Bruylant.

📕 An equivalent book in French, Les Buts Monumentaux de la Compliance, directed by Marie-Anne Frison-Roche, will be co-edited by the JoRC and Dalloz.

Read the definition (in French)

📝It constitutes the basis for an article:

📕 this article will be published in its French version in the book  Les buts monumentaux de la Compliance, in the Series

📘  in its English version in the book Compliance Monumental Goals, in the Series

However, this exercise is not wasted. In fact, in the confusion which still marks the emergence of Compliance Law, the legal nature of the compliance mechanisms remains contested. However, the imposition of Proportionality, not only as it is an obligation but as a limitation of powers in this first definition focusing on Efficiency, recalls that Compliance, conceived as " process ", would then in any case be admissible at the very least as a" Procedure ", anchored in the Rule of Law Principle, therefore self-limititation expression.   But Proportionality is then like a cold shower in compliance, since it is defined by self-limitation in a Law which would be defined by effectiveness as its only definition...  Ineffectiveness In Efficiency...: it is no longer a relation, it is then an opposition which is established between the two terms ...

In this definition of Compliance Law, there is no other choice than to put process in this sort of  squaring circle because in this procedural Compliance Definition, as a method of effectiveness, of effectiveness and efficiency of the rules estimated more important more than others, it must however be admitted that Compliance Law, as any branch of the Law, without denying its very legal nature, must be anchored in the Rule of Law Principle.

By the principle of proportionality, this new branch of Law is forced to anchor classic solutions from Constitutional, Public or Criminal Law,  the Principle of Proportionality prohibiting the Compliance of be just a process. The Repression  Law  has a large part in this conception and the Proportionality Principle reminds it of the part that Criminal Law still takes (with difficulty and for the moment ...) in the admission of ineffectiveness that the Law demands, particularly in the face of Compliance technologies.

In this first definition, the Proportionality Principle thus reminds Compliance, entirely held in the idea of ​​Efficiency that it is a "Law" of Compliance" and anchored in the Rule of Law Principle, it must limit its Effectiveness . It is therefore a kind of "price" that these techniques pay, with regret ..., to the Rule of Law and in particular to the freedoms of human beings. There is a strong temptation not to want to pay this price. For example by affirming that there is a new technological world, which the new system, entirely in algorithms, will promote in a move away from the Law, rejected towards the Old World. Frequently proposed, or set up for instance in China. Others say that we must "do the balance". But when you balance Efficiency performance and Efficiency self-limitation, you know very well who will win ...

But why not look rather on the side of a Definition of Compliance Law where, on the contrary, the two concepts, instead of opposing each other, support each other!

Indeed, Compliance Law is then defined as an extension of Regulatory Law as a set of rules, institutions, principles, methods and decisions taking their meaning and normativity for specific Goals. . In this definition, which is both specific and substantial, these "Monumental Goals" are systemic and require that all means be mobilized for them to be achieved. Future and negative in nature (events that must not happen) but also future and positive in nature (events that must occur), Compliance Law does not apply to all the rules whose  effectiveness required, but this specific type of "Monumental Goals", in an alliance between the political authorities in charge of the future of human groups and the entities in a position to mobilize its means. The method is then different. It is no longer a question of entrenching and the prospect of repression fades into the background.

A reversal occurs. Proportionality ceases to be what limits Efficiency to become what increases Efficiency. As soon as Goals have be precised, Proportionality is not the consequence of the limitation (as in the principle of "necessity" of Criminal Law, insofar as the latter is an exception), it is the consequence of the fact that any legal mechanism is a "Compliance Tool", which only has meaning in relation to a "Monumental Goal". It is therefore essential to set the "Goal Monumental Goals". As this is where the legal normativity of Compliance is housed, the control must first and foremost relate to that. Then all the Compliance Tools must adjust in a "proportionate way", that is to say effective to its goals: as much as it is necessary, not more than it is necessary. According to the principle of economy (which is also called the "principle of elegance" in mathematics).

Everything then depends on the legal quality of the goal. De jure - and this would deserve to be a requirement at constitutional level, the goal must always be clear, understandable, non-contradictory, attainable.

This increases the office of the Judge. This renews the power of the Legislator in a conception which ceases to be discretionary.

But the Legislator retains the prerogative of determining the Monumental Goals, while the Judge controls the quality of the formulation that he makes of them, in order to be able to measure the proportionality of the means which are put in front by the State and the Companies, while Companies can rally to the Monumental Goals of the Politics by making an alliance with them, but certainly not instituting others in an autonomous way because they are not normative political entities, whereas they are free to determine the means necessary to achieve these goals, the Judge controling the proportionality mechanism that makes this new system work.

The case law of the German Constitutional Council expresses this conception. It is fully consistent with what Compliance Law is in what is the one Monumental Goal containing all the systemic Monumental Goals: the protection of the human being.

🎥 watch the emission totally in French

🎥 watch the emission with English subtitles