What monumental goals for the Regulator in a rapidly changing audiovisual and digital landscape?, in Frison-Roche, M.-A. (ed.), 📘Compliance Monumental Goals

► Article Summary (done by the JoRC editor):  In France, since the law of 1982 which put an end to the State monopoly on the audio-visual area, the landscape has profoundly evolved and diversified. In view of the multitude of players who are now established there, the Conseil supérieur de l'audiovisuel - CSA (French High Audiovisual Council) must ensure the economic balance of the sector and the respect for pluralism, in the interest of all audiences. The growing societal responsibilities of audiovisual media and new digital players have multiplied the "monumental goals" on which the CSA (soon to be Arcom) is watching.

Its competences have gradually been extended to the digital space and the successive laws concerning its missions aim at new objectives, in particular in terms of protection of minors, fight against online hate or against disinformation. The emergence of a new European model of Regulation makes it possible to give substance to these additional goals, the Regulator adopting a systemic perspective and calling on soft law tools to fulfill its new missions.

📝 see the general presentation of the book, Compliance Monumental Goals, in which this article is published 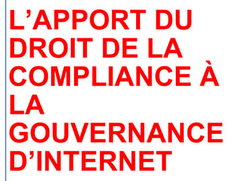 Compliance Law is for the Policy Maker to aim for global goals that they require to be achieved by companies in a position to do so. In the digital space built on the sole principle of Liberty, the Politics must insert a second principle: the Person. The respect of this One, in balance with the Freedom, can be required by the Policy Maker via Compliance Law, which internalises this specific pretention in the digital companies. Liberalism and Humanism become the two pillars of Internet Governance.