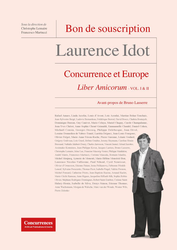 This article is written in French.

► English summary of this article: Competition Law has become so huge and has included so many regulations and "regulatory" perspective that we end up giving up trying to grasp it as a whole, preferring to become a specialist in one of its parts.  That would be to lose sight of the simple and strong reason that unites the whole and gives it its breath: Freedom.

Freedom experienced by the persons in their daily economic action, Freedom guarded by Competition Law, always returning to its principle: Free Competition. Therefore, the European Union places great emphasis on Competition. To make effective and to keep it in this state, “Competition Policy” is based on Competition Law, but if authorities and judges do not blame companies for their power, they do not rely on it.

To do this, Competition Law must be supported by Compliance Law, which strongly encourages companies to act for the effectiveness and the promotion of competitive principles. Competition Law is thus slipping from the Ex-Post towards the Ex-Ante, the commitments of companies leading them to cease being passive, even punished, to become convinced actors and themselves pedagogues. Something to please a great Professor of Competition Law, to whom homage is paid here.

🚧Read the Working Paper, basis of this article.

📝read the article (written in French)