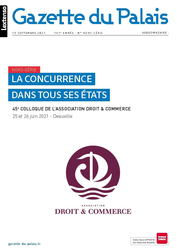 This publication is in French, but the Working Paper which is the basis of this article is bilingual.

📅 this article follows the colloquium of the French Association Droit & Commerce in Deauville (France), the 25th  et 26th June 2021.

✏️ It is based on  the bilingual Working Paper built on the notes taken during the colloquium for establishing the conclusion which has been provided.

Article English Summary: All of these contributions on the issue of the "Competition in all its states" highlighted the choices available for what could be this branch of Law tomorrow: choice of a political nature between various possible definitions of Competition Law.  In method, the main thing is that this definition be clear. For this, this definition must be based on a principle and that the goal pursued by competition law is simple, so that in a second step, competition law can be easily articulated on the one hand with other branches of law. (by the care of the judge, in particular), on the other hand with "policies", such as "competition policy", then other policies (by the care of political authorities, especially European). In essence, two conceptions of principle are opposed: either Competition Law will want to appropriate the goals of other branches, such as those of Regulatory and Compliance Law, or Competition Law will have the modesty to remain anchored in its definition as Market Law. This is the crossroads where we are.