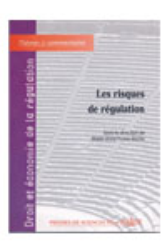 The topic of of this article is to propose a new notion, already presented in 2001 in the article "Regulation Law": "Interregulation".

This mechanism will makes more easier a unified decision when several autonomous, even contradictory, regulations are legitimate to rule a situation. This creation therefore responds to a gap in the general system, of which the antimony is a variant. Political power no longer has the means to unify these disparate sources because it is "overtaken by the globalization of sectors and markets. Likewise, the hierarchical mode of traditional law cannot be suitable for autonomous sectorial regulations. There is therefore a need for interregulation between regulators, for the creation of a common "doctrine", or by procedural means, such as "authorized advice".

Read the article. (written in French)

Read the general presentation, written in English, of the collective book, Les risques de régulation, in which this article has been published.

Below, read the article Summary.

It is about proposing a new notion: "interregulation".
We can define it "when a process, technical, procedural or doctrinal, responds to the need to bring into contact autonomous regulations, to make them take each other into consideration, when we do not have processes allowing one to pass one in front of the other, and which nevertheless results in a decision ".

We can thus "take into account several autarchic, egalitarian and divergent regulations, each having a legitimacy to govern the situation in question. Indeed, the regulators are very powerful in their sector, but blind to others and this can be catastrophic.

It is indeed necessary to identify unified decisions because if companies initially have an interest in playing with contradictions between regulations, its hiatuses are turned against them, in their complexity, bureaucracy and insecurity. Global companies, and no longer just international ones, are penalized by such a situation, the contradiction amounting to a system gap: it is up to who regulates first! ("first blood regulation"). Thus, the less interregulation, the more imperialist unilateralism.

However, at the moment, the political power does not have the power required to produce this required unified decision. However, because the latter, by virtue of its sovereignty, has a legitimately arbitrary power, could put an end to such an aporia, to take a third position. The interministerial process has always been part of this. But the regulated systems concern markets whose contours go beyond the borders of the States and on which the operators are mobile, which makes the solution inaccessible.

Likewise, traditional Law cannot organize interregulation because it cannot hierarchize autonomous regulations. For the moment, interregulation is de facto and depends on the people who are notably in charge of chairing the regulatory authorities.

We can certainly think of organizing interregulation by these two extremes of the retreat of the external regulator, in particular that constituted by the State, or on the contrary by the increase of an external regulator, such as the IMF, or even the 'WTO. But States are literally overtaken by globalization. Companies have concluded that they are the only ones "of size" to regulate, but experience has shown that they do not have the "measure", being captured, the objective of regulation exceeding their interests. .

The avenues are more between the regulators themselves, either in the perspective of a merger, or in a procedural mesh, for example opinion ("theory of authorized opinion") or common doctrine.