This collective publication is written in French 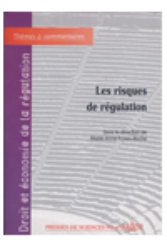 After defining what may be a "crisis of Regulation" and stressing that the crisis is a political phenomenon, the book devotes its first part of "systemic risk," which refers to the assumption of the general crisis. This hypothesis is exposed to prospectively or from cases in different sectors, e.g. financial, energy and health, before wondering how to organize post-crisis.

The regulation itself including risk, the book chooses to study especially the inconsistency because it is the higher legal risk for an economic system. Therefore, it is proposed to organize inter-regulation mechanisms.

Finally, the specific risks Regulator is able to address are conflicts, through the dispute settlement mechanism, derived from judicial system. It is examined in each of the regulated sectors.

This book is the third volume in the series devoted to the "Droit et Economie de la Regulation [law and economics of regulation].

This volume follows a first which focused on the issues of legitimacy and a second on the rules and powers. It was followed by three other volumes : Volume 4 is devoted to the commitments, Volume 5 is devoted to the liabilities and the volume 6 is relating to the regulation of health.

Published in 2005, that is to say two years before the first events of the global financial crisis, this book aims to restore not so much the risks that are subject to regulation by such as financial risks or environmental hazards, but ask that the regulation itself is a source of risk. Indeed, regulation can be uncertain, regulators can make mistakes, it may even be the faults of regulation, so that's the regulation that comes out of the crisis.

Then articulates a vicious circle between the risks inherent in regulated systems, since it is their presence that justifies the regulatory apparatus, and regulatory risks of a different nature, often scientific or institutional nature, which makes the regulation , far from extinguishing the risks, ablaze.

That is why the prior article in this collective publication is by economists who study the hypothesis of a "crisis of Regulation". The authors emphasize in particular that if the risk is inherent in the sector, regulation is not itself a risky affair, it is his failure that creates the risk. Therefore, the regulator's intervention is problematic because it can turn the crisis,  or because it is the source and doesn t show up, or because it makes it persist or because it increases it. The regulator doesnt have to pursue a goal of 0 risk sector but must regulate it through its own capacity for commitment and the operators liability. The regulator must receive appropriate incentives and not be a victim of capture while the State must ensure an effective institutional design to ensure the independence of the regulator.

In the same prior part of this book, a contribution of political science shows that a crisis of regulation is intimate political, in that it is rocking it, the threat of the crisis being managed by the Politic preventively. The political challenge is to determine which has the power to designate what constitutes the threat. To the extent that a mere threat could hamper freedom, this is the prerogative of individuals to transform the prescription and not to the law managed by the State. Transparency could be a sufficient tool for the political crisis management.
Finally, the risk is political, it is logical that it is founded in the Constitution.

The first part of the book focuses on the risks of systems, through the assumption of the "general crisis." There is evidence that in the banking and financial sector, there is a strong link between regulation and crisis since the regulation is aimed at the prevention and the management of crises and output. The author insists that without doubt, in other sectors, including industry, some companies have a size and action so crucial for their sector, that systemic risk is equally and that a similar regulation should be considered.

In the energy sector, the sample kept in mind each of the "Californian crisis" is studied to show that it was caused by failures in competitive electricity reforms that were carried out and the poor fit with other regulations, including environmental as well as social behavior (heat management and cooling). The California crisis is indeed a crisis of regulation.

The health risk is also an object of regulation for food safety, through the mechanism of a global regulation of the chains of distribution channels, contamination, interactions between agriculture, nutrition and health, is necessary. Excessive fragmentation of these regulations or the fact that they are organized in a very different way for these diverse objects yet intimately connected is a risk of regulation.

Therefore the following contribution highlights that in general the regulation should be used as a mode of crisis prevention. Since the regulation is defined as the competition that adds something else, that "something else" may be the risk. But the risks are very different depending on whether financial, health or electricity, risk control may arise from the heterogeneity of risk. Therefore, should we just use regulation to prevent the risk, whereas regulation is certainly concerned about the balance vis-à-vis the competition but does not include the huge uncertainties of the risk. Thus transparency of regulation is not enough and certainly not to be preferred the powerful principle of communication that supports the precautionary principle. But you can also ask the regulator to support this risk management, if the regulatory authority is the most appropriate institution to do so. But the independence that characterizes it is not central to the prevention of risks and the multiplicity of regulators thwarts the centralization of information, which is a risk.

The following economic contribution studies the time of crisis, particularly risky time regardless of the sector in question.

The paper highlights that the number of attacks increased regulation, perhaps because we are in transition between two types of economic system and, in addition, the short-termist operating in regulation creates risks, particularly through conflicts of interest. There may be risks when regulation was put in place, in consideration of changing circumstances, for example the radical transformation of the dominant undertaking requiring an adjustment of the regulation that the regulator cannot only influence. In a more general way, there is crisis of Regulation when the regulator is no longer able to meet all its own commitments. The prospect of crisis of the industry or regulation which has an incentive effect on operators, the regulator has to adapt, otherwise it goes into crisis. Much remains the commitment capacity of the regulator and the state even through the crisis, which accordingly is to remain stable behaviors of the operators. It would be not inconceivable if the regulator is outdated and no longer enforce compliance, or to himself or to others, to provide a kind of "High Authority of regulation" that would compensate in case of crisis to protect the Politic from the pressure groups and to enforce compliance.