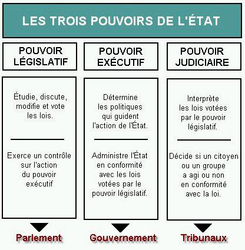 Montesquieu has written the theory of the political separation of powers. The French political model, by its Constitution and since the French Revolution, has separated the legislative power stemming from universal suffrage and, in France, the executive power, the head of state being directly elected. Formally, the judiciary is not a power but a mere "authority".

This last statement still corresponds to the letter of the texts, in particular to the letter of the French Constitution, but the evolution of the texts and especially the evolution of practices has led to the formation of a sort of "jurisdictional power",  linking today to the existence of a judicial power, since the judicial power includes both the power of the administrative courts and the judicial courts. There are therefore three Powers which must be "separated": the legislative power, the executive power on the one hand and the jurisdictional power on the other hand.

Regulation does not correspond to this constitutional scheme of separation of powers on several fundamental points. In the first place, the Regulator combines the legislative power, of the quasi-legislative type, with the executive power notably when it adopts individual decisions, and the judicial power when sanctioning or resolving the disputes. This cumulation of all powers makes it a kind of "miniature State", or even a sort of "little king", referring to the phenomenon of reforodalisation of society. This has been strongly criticized in the name of the principle of separation of powers.

Second, the regulator, an organ of the State, does not obey the executive, since by nature it must be independent. As such, the Regulator, if it most often belongs to the State taking the form of an Independent Administrative Authority (IAA), does not belong to any power. Should we consider that regulators, whose powers are extreme in economically and politically crucial sectors, constitute a kind of fourth political power, going beyond the traditional organization? Some think so.

Others also go very far, but in another direction. They believe that the Regulatory Law has destroyed the continental system of separation of powers to lead the countries concerned towards a more English or American political system of check and balance.