This book is about Internet, as a Space of Interregulation. It is written in French 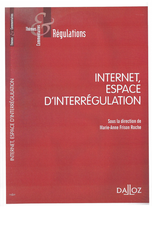 Often described as a "legal desert", digital appears as a kind of jumble of systems of various regulations that overlap, deform and contradict each other. In reaction, an "interregulation", de facto or de jure, in law more or less flexible, is in the process of being established. Who will be the Regulator: The States? The judge? The Internet users?