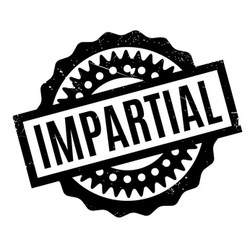 Impartiality is the quality, maybe the virtue, that is demanded of the judge, not only the one who is called like that but also the one who has the function to judge the others (maybe without this name).

It can not be defined as the absolute positive aptitude, namely the total absence of prejudice, the heroic aptitude for a person to totally ignore his or her personal opinions and personal history. This heroic virtue is nonsense because not only is it inaccurate, impossible but it is also not desirable because a person is not a machine. It must not be so because good justice is human justice. In this respect, impartiality refers to a philosophical conception of what is justice and what is Regulation, not machines, but systems that must keep the human person in their center (Sunstein).

Thus Impartiality is articulated with the subjective nature of the assessment not only inevitable but also desirable that the judge makes of situations. Because Law is reasonable, Impartiality is defined only negatively: the absence of bias.

Impartiality is defined first and foremost as a subjective and individual quality, namely, the prohibition on the person who makes a decision affecting the situation of others (as is the case of a judge) to a a personal interest in this situation. The constitutional prohibition of being "judge and party" is thus the expression of the principle of impartiality. This definition is in line with the otherwise general requirement of no conflict of interests.

Impartiality is defined secondly as an objective and individual quality, namely the prohibition for a person who has already known of the case to know again (because he or she has already had an opinion about it, this having constituted an objective pre-judgment).

Impartiality is defined thirdly as an objective and structural quality, which obliges the organ which takes judgments to "give to see" a structure that makes it fit for this impartiality, objective impartiality that third parties can see and which generates confidence in its ability to judge without bias. This theory of English origin has been taken up by European law in the interpretation given to the European Convention on Human Rights. The expression "apparent impartiality" has sometimes given rise to misunderstandings. Indeed, far from being less demanding (in that it is "only" to be satisfied with an appearance of impartiality and not of a true impartiality), it is rather a matter of demanding more, not only of a true impartiality, but also of an impartiality which can be seen by all. This leads in particular to the obligation of transparency, to which the institutions, notably the State, were not necessarily bound by the law.

For a long time the Regulator, in that it took the form of an Administrative Authority, was not considered a jurisdiction, it was long considered that it was not directly subject to this requirement. It is clear from the case law that the national courts now consider that the regulatory authorities are courts "in the European sense", which implies a fundamental procedural guarantee for the operators concerned