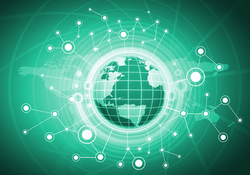 We must give a strict definition of globalization. Globalization isn't simply the intensification of economic exchanges through the lowering of borders and the rapidity of trade, a phenomenon known since antiquity and of which the World Trade Organization (WTO) is today the guardian. Globalization aims at a radically new phenomenon, that of economic exchanges without any constraint of time or place, dealing with goods without corporality since it is information. This is the case for all personal data, all information and all finance (because financial instruments can be analyzed as information), which through technology flows out of space and in an instant. In what can be called "real virtuality", states and law do not know how to grasp normatively this new reality, because until now they had only apprehended palpable objects in spaces enclosed by their borders . Globalization, therefore, is a radical change the world, that has radically changed the game.

To answer it, one can certainly look outside the Law and the States, for example to rely on the moral sense of the actors and the self-regulation of the sectors by the actors, the actors themselves being self-regulated. Except for imagining the constitution of a world State, one moves rather towards institutions of public international law, of which the IMF or the WTO can be models, or the networking of all the regulatory authorities that are more technocratic and static, to be a reflection of this globalization: it is then a question of trying to "regulate" it, that is to say not to let occupy this global space, often virtual, by what Alain Supiot calls the "total market", but puts it in balance with other principles, such as public service, risk prevention or fundamental rights. It is especially the issue of "regulation of the digital" .