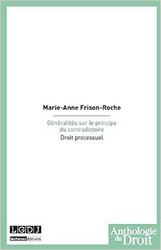 This book is the publication of a thèse d'Etat (French official thesis) written under the direction of Jean Foyer and defended in the Panthéon-Assas University (Paris II) face to a jury made up among others of François Terré, René Chapus, Gérard Cornu, Geneviève Viney.

The main idea is to defend that the principle of contradictory is a simple and fundamental principle, without which there is no Law. It is the reason it is obvious to study it as in civil procedure as in criminal, administrative or arbitrary procedures, to take back a "Procedural Law" perspective conceived by Motulsky. Indeed, without a judge listening without having already decided the facts and Law versions that presents who's the situation will be affected by the decision that the judge will make, there is no rule of Law.

Read the summary (in French)

Read the introduction (in French)