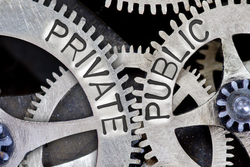 The distinction between "Public Law" and "Private Law" is important. In the systems of Continental Law, or still called under Roman-Germanic Law, or even called Civil Law systems, it is even around it that legal systems are built: it can be a basic distinction, a summa divisio, as it it in the Civil Law systems. In the so-called Common Law or Anglo-American systems, the distinction is less fundamental, but it remains, justifying in particular that the rules and disputes concerning the administration call for special rules and are apprehended by special tribunals.

In principle, this distinction is based on the nature of the persons whose legal situation is examined. Under"Public Law" a legal situation involving a person who is itself a public-law entity: the State, a local authority, a public undertaking, etc. That is why, for example, the contract which may be concluded will be of public law, and the judge who may be seized of it will be an administrative court. If the situation does not involve a person governed by public law, then it will be governed by "Private Law". There are a thousand exceptions, but this is the starting and basic and fondamental principle.

Two essential remarks, bearing a system of values, explaining that the systems of Civil Law and Common Law are in fact confronting each other.

The two bodies of rules and institutions are not of equal strength because one of the categories is "closed", corresponding to one criterion (the "public person"), while the other is open: Public Law is a closed category; on the contrary, Private law becomes "active" as soon as there is no public person (a "private person" who or which must define himself or itself as a "non-public person").

One can consider this articulation between Public Law and Private Law in two ways, radically opposed. It may express a mark of inferiority in disfavour of private law: we are all "ordinary" persons in "ordinary" situations with "ordinary" activities (this will be the French conception ....). On the contrary, Public Law is the mark of the State, of Public Order, of Sovereignty, of public power, of the general will, in the interstices of which individuals slip in to act and satisfy their small particular interests

On the contrary, Private Law can be considered as the expression of the "common law": people are free and do what they want, through ownership and contract. As an exception and because they have elected people to do so, the rulers (whom they control), by exception, enact norms that constrain them. But this is an exception, since repression - public law and criminal law, which has the same status in this respect - is only a tribute to the freedom of persons, since this freedom remains wholly in the form of the private enterprise on the market.

It is then measured that the articulation between Public and Private Law profoundly reflects a philosophy and a political position. If it is considered that Regulation is the underlying order by which the Sovereign allows the deployment of his subjects who also benefit from a long-term policy constructed by the autonomous and measured political will, then Public Law in Is the master, the Regulation Law expressing a renewed search for efficiency, this but only this. If we believe that Regulation is whereby economic rationality manages to protect persons and companies from risks and to compensate for market failures, a market whose liberal principle remains the ideal, then Private Law is the core, whith contract and private property as basis tools.

France and the Latin countries adhere rather to this metaphysics of values which entrusts to the Public Authorities and the State the legitimacy and the power to express the general interest by Public Law, Regulators and Constitutional Courts, expressing it on a technical form renewed by the Regulatory tools: incitations, soft law, etc. The legal systems whose history draws on British history put more trust in the person of the entrepreneur and conceive of Regulation Law as an efficient outsourcing of functions to administrations that are efficient, informed and impartial.

Certainly, in the technical daily of the Law of Regulation and following the different sectors, Public and Private Law mix up:  public companies take the form of publicly traded companies under private law or private companies will be entrusted with missions of public service, instituting them as second-level regulators as are the infrastructure network operators.

But the fundamental conception of systems (rooted in the history of the people) and practice marry. In the silence of regulations (and the more they are gossiping and the more the judge must interpret them, which amounts to a "silence"), what sense to give to the system?

To take only a few questions, frequent in practice:

The absence of a firm and shared definition of what is the Law of Regulation does not facilitate practice. Hesitations in translations from one language to another increase confusion.

It should be recognized that the criterion of distinction has little economic rationale. The notion of risk would be a clearer and more manageable criterion. But it would then lead to a greater challenge to the distinction between Public and Private Law. Because the Law of Regulation, impregnated with Economy and Economic Analysis of Law, has sometimes little basis of legal tradition, it put in question of this summa divisio. If this were to be the case, it would be the totality of the legal systems which would be upset, especially in its judicial organization, since the judicial civil and commercial system is so distinctly distinguished (that of "ordinary" persons, that of "common law ) and the administrative judge (the "natural judge" of the State). It is then realized that the Law of Regulation challenges the whole Law, especially in the Latin countries and the Civil Law systems.