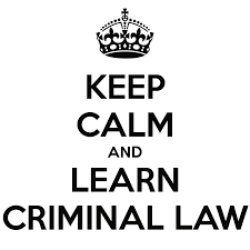 Criminal law is a very special branch of law.
While it expresses in the highest degree the "legitimate monopoly of State violence”, which cannot develop beyond the borders because it is intimate to the regalian power, and should in this respect be governed by Public Law, it is traditionally inserted in Private Law. This is due to the fact that Criminal Law is conceived as a legitimate exception to the liberty of persons (to act as they wish - to which the criminal prohibitions are opposed - to come and go - Imprisonment contravenes). The judicial judge in so far as he is constitutionally the guarantor of the freedom of persons is therefore the natural criminal judge.
Criminal Law can therefore be applied only through the office of the judge, which is inseparable from criminal proceedings, whereas other substantive branchs of law (Civil Law, administrative Law, Commercial Law, etc.) applies apart from the corresponding procedure (civil procedure, administrative litigation, commercial procedure, etc.), or even to apply without trial.
Because it is an exception, Criminal Law is constitutionally limited, by the principle of legality of offenses and penalties, of by the principle ot strict interpretation, of interpretation in favorem. Because it has a logic of its own, it constitutes within the legal system a branch of the so-called "autonomous" law, which does not take account of other branches. Moreover, it takes precedence over them, the criminal decisions having absolute authority, the criminal holding the civilian in a state.

But economic law, and even more the regulatory law, has completely challenged this powerful classical conception.

Indeed, the teleological Regulatory Law aims at achieving its goal: to balance the principle of competition and other concerns, such as access to common goods or the prevention of systemic risks.
In this very dynamic and systemic conception, law is only an instrument. It is sought only in its ability to produce the desired effect. The criminal law then both enhanced and will fall from its pedestal.
Indeed, sanctioning power, including fines and prohibitions, is considered the necessary and ordinary core of what must be effective regulatory system. Thus the laws increased the amounts incurred.
But because the issue is effectiveness with regard to the goals, Criminal Law becoming an instrument, it thus loses its autonomy. Its interpretation is made in the light of the other rules which it ensures the effectiveness, rules of Public Law, Company Law, Civil Law, system of proofs, etc. Moreover, because it must be effective, its interpretation ceases to be strict: teleology often involves a broad interpretation.
Its intimacy with the State dissolves and the emergence of a criminal law from the markets imposes itself, whose contours follow the markets themselves. Thus, the repression of market abuse is organized on a European scale and most often a decal of American Law. Global Criminal Law is being put in place. It applies outside the trial, notably through the transaction or settlement, which flows the criminal law into the contract. To apply more broadly, the evidence changes in nature, admits presumptions

Criminal law is dissolved in the law of repression, which is better conceived in a repressive administrative rules, applying objectively to breaches. The passage from one to the other, the cohabitation of one with the other, is done with difficulty, as shown in the European saga Non bis in idem.
Whatever the country, constitutional courts, whose office is to defend the rights and freedoms of individuals, tend to defend the classical conception of Criminal Law, while regulators tend to defend the regulatory conception of the objective sanction of failures.