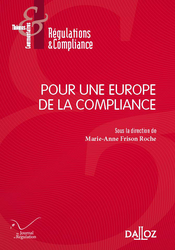 It is sometimes said the construction of Europe is blocked, or even is in decline. But this consruction can only advance because it is not only community to be rediscovered by the effect of a common culture or the result of an agreement between States or the benefit of commercial exchanges: it is also a legal Order. And Law is moving forward, sometimes like a goat through rulings of lightning justice, sometimes through legislation whose development have certainly the step of the turtle but also the strength of this military figure.

For this, any legal mechanism is good to take, so foreign, even aggressive, it may seem at first. Compliance, on which everyone questions the definition, in which we sometimes see the enemy to fight, about which we often doubt that it is really a legal mechanism, could well be useful.

So, let's seize the opportunity. It is not so common that a branch of law appears. The framework is still young, it is appropriate to take advantage of what is sometimes presented as defects, for example the uncertainty of definitions, but which are only defects of youth, or what is perceived as archaisms, in particular the violence of the compliance mechanisms, in their scale, their procedure and their territorial scope. But isn't a means of reconstituting the regalian at the moment when the states are struggling to recover from a report given to the cause to the territory ? Allowing them to pursue goals in the pretension that they must be satisfied (for example the fight against corruption or the sale of human beings)? Compliance Law allows the states to claim again and with a stronger voice their prerogatives.

Moreover, let us take advantage of this still malleable idea of ​​the Compliance Law to obtain that Europe imbues the compliance mechanism with its legal Order. Compliance Law is undoubtedly the Law of tomorrow, the law without frontiers by which the legitimate public authorities set the Law, by fixing Ex ante goals and internalizing them in the crucial operators who carry them out in ways they build, public supervisors continuously monitoring the results achieved the goals set by the authorities. The Compliance Law allows that the powerful worldwird companies are not our masters because is the master who sets the goals and not the one who reaches them.

This is where Europe brings to the Compliance Law, where Europe can be exemplary of the Law of tomorrow. Indeed, where long-established systems, as American Law did, have developed Cmpliance techniques to prevent systemic risks, Europe can put back to the center its primary concern: the Person, a notion that Europe invented in order to protect by rights and obligations human beings against the only game of powers.

This is what the authors of this book demonstrate to us.