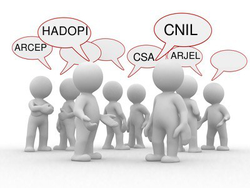 The Independent Administrative Authority (IAA) is the legal form that the legislator has most often chosen to build regulatory authorities. The IAA is only its legal form, but French law has attached great importance to it, following the often formalistic tradition of public law. They are thus independent administrative authorities, especially in the legal systems of continental law like France, Germany or Italy.

The essential element is in the last adjective: the "independent" character of the organism. This means that this organ, which is only administrative so has a vocation to be placed in the executive hierarchy, does not obey the Government. In this, regulators have often been presented as free electrons, which posed the problem of their legitimacy, since they could no longer draw upstream in the legitimacy of the Government. This independence also poses the difficulty of their responsibility, the responsibility of the State for their actions, and the accountability of their use of their powers. Moreover, the independence of regulators is sometimes questioned if it is the government that retains the power to appoint the leaders of the regulatory authority. Finally, the budgetary autonomy of the regulator is crucial to ensure its independence, although the authorities having the privilege of benefiting from a budget - which is not included in the LOLF - are very few in number. They are no longer referred to as "independent administrative authorities" but as "Independent Public Authorities", the legislator making a distinction between the two (French Law of 20 January 2017).

The second point concerns the second adjective: that it is an "administrative" body. This corresponds to the traditional idea that regulation is the mechanism by which the State intervenes in the economy, in the image of a kind of deconcentration of ministries, in the Scandinavian model of the agency. If we allow ourselves to be enclosed in this vocabulary, we conclude that this administrative body makes an administrative decision which is the subject of an appeal before a judge. Thus, in the first place, this would be a first instance appeal and not a judgment since the administrative authority is not a court. Secondly, the natural judge of the appeal should be the administrative judge since it is an administrative decision issued by an administrative authority. But in France the Ordinance of 1 December 1986 sur la concurrence et la libéralisation des prix (on competition and price liberalization), because it intended precisely to break the idea of ​​an administered economy in order to impose price freedom on the idea of ​​economic liberalism, required that attacks against the decisions of economic regulators taking the form of IAA are brought before the Court of Appeal of Paris, judicial jurisdiction. Some great authors were even able to conclude that the Paris Court of Appeal had become an administrative court. But today the procedural system has become extremely complex, because according to the IAA and according to the different kinds of decisions adopted, they are subject to an appeal either to the Court of Appeal of Paris or to the Conseil d'État (Council of State) . If one observes the successive laws that modify the system, one finds that after this great position of principle of 1986, the administrative judge gradually takes again its place in the system, in particular in the financial regulation. Is it logical to conclude that we are returning to a spirit of regulation defined as an administrative police and an economy administered by the State?

Finally, the third term is the name itself: "authority". It means in the first place an entity whose power holds before in its "authority". But it marks that it is not a jurisdiction, that it takes unilateral decisions. It was without counting the European Court of Human Rights (ECHR) and the judicial judge! Indeed, Article 6§1 of the European Convention on Human Rights states that everyone has the right to an impartial tribunal in civil and criminal matters. The notion of "criminal matter" does not coincide with the formal traditional concept of criminal law but refers to the broad and concrete factual concept of repression. Thus, by a reasoning which goes backwards, an organization, whatever the qualification that a State has formally conferred on it, which has an activity of repression, acts "in criminal matters". From this alone, in the European sense, it is a "tribunal". This automatically triggers a series of fundamental procedural guarantees for the benefit of the person who is likely to be the subject of a decision on his part. In France, a series of jurisprudence, both of the Cour de cassation (Court of Cassation), the Conseil d'État (Council of State) or the Conseil constitutionnel (Constitutional Council) has confirmed this juridictionnalization of the AAI.