LAW AND HISTORY: In British Law, Is the obligation to drive on the left an arbitrary rule? 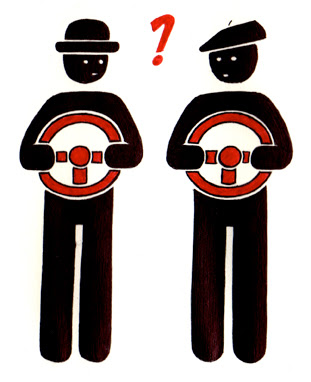 One of the reasons why the law has a bad reputation is that it would be "arbitrary". It would be composed of rules, imposing to do this or not to to do that, without strong reasons. Ultimately, what we do does not matter, as long as we all behave in a similar way. No matter the substance in the legal rule which is adopted, the law, is primarily question of order.

And a frequent example is the rule to drive on the left or to drive on the right on the roads.. Because it is a legal rule. It is often said that the law is "like that" and it is made just for the sole purpose of ensuring that everyone does the same, so there is no accident .

But is that such an arbitrary rule ?

Do the British, driving on the left, have no more reason to do so  that French who drive on the right ?

If we can show that British legal rule has a more rational basis, then we must end up suspecting that no rule of law is established "without reason."

In Law, it is possible to have an element of arbitrariness, because the purpose of the legal system is to organize social practices in one way or another, substantly no matter whether it is this or that as long as it is organized.

To support the arbitrary nature of the rules of law referred to by convention, just so that everyone follows the sames and nothing more, is a most often cited legal rule which forces us to drive cars on the right, in France, or on the left, in U.K., whose rule violation is punishable by criminal penalties.

But, this is a very poorly chosen example.

Indeed, driving on the right is a political decision of Napoleon, coming unify various social practices, corresponding to rationalities being crystallized in ways, usages, customs, ie a first form of law ... Before Napoleon gets involved ...

The first practice was rationally based on the LHD. Because 90% of human beings have always been right-handed, the sword is worn on the left. From then on, it was so that the weapons would not collide as people cross to the right, and need to keep it on the left of the road in a usual way.

So everyone travels on the left.

But this legal practice adopted in antiquity and continued since, was upset by Napoleon, who is both soldier and legislator

However, as a man of war, he made his horsemen "drive right" to better attack the enemy, generalizing the rule thereafter.

Always thinking big, he transformed the soft law into hard law to harmonize practices. Thus, we are not so far from the idea of the "Code civil" (French Civil Code) ...

But if Napoleon ruled Europe, Britain remained a closed door, so it kept the old rule built on the first rationality and kept driving on the left.


On reflection, perhaps, it is not possible to find a law of "pure convention." In any case, the rule of LHD or RHD certainly cannot be taken as the example of it.