In the same way that blood was to be "The Law", culture was only to be the return to "Nature": this is the "Nazi revolution" explained by Johann Chapoutot in a new book 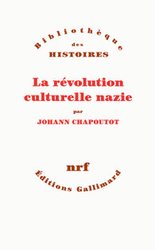 Taking a system seriously is to understand it. This is not admitting it. It is to underline its bone to better identify it, to attach markers, to recognize some traces here and now.

Yes, we must take an interest in the Nazi system  (I), to continue to seek to understand Nazi legal system (II), to admit the part that intellectuals took in building a system that revolutionized the intellectual vision of the world by inventing a Nature predominate on everything, even human beings, an intellectual construction in which Law and professors of law had a great place. This allows us to ask ourselves, not without fear, if we are not confronted today with a similar "cultural revolution", the scale of which we do not want to see, which we maybe collaborate (IV).

I. ADDRESSING THE NAZI THOUGHT SYSTEM

This is what Hannah Arendt did, listening to the trial of Jerusalem. For that, she was accused of having become a Nazi; She was, on the contrary, be perceptive about what the Nazi skeleton was.
This painful exercise of insight, Johann Chapouto does it by reading the Nazi body of doctrine, thought, philosophy.
Because this system exists: it is coherent, it can defend itself. That its adoption entails the destruction of so many human beings is one thing; this does not remove the coherence of its construction and the solidity of its contents.
Moreover, because Nazism is a system of thought, not a delirium without consistency elaborated by a megalomaniac fool and some of his sadistic friends, it is only by taking it seriously that one can hope not reproduce such dogmatic ensembles, which can produce the same systemic destructions.
Is it not a danger that we run, here and now?

Thus, in 2014 Johann Chapoutot first wrote an admirable book: La loi du sang (The Law of Blood – this book is not translated in English).
He explained that Nazi law is a "real Law", a legal system strongly built, which has been a very important part in the Nazi system.
The very specific Law poses the nature as an absolute principle, namely blood. It is around this biological principle that the legal system is built. It is a principle by which everything must be matched and nothing could contradict it, as, for example, a principle of equality.

This legal “Law of blood” has no meaning in the face of the primary principle of blood since we have different bloods. Certainly, in biology this “Law of blood” is not “true”, cannot exist since "pure blood" does not exist, since we are all of "mixed blood", if we wanted to remain in this vein, but because we are in the Law perspective, that is to say, a system constructed dogmatically, around a principle posited and therefore properly invented, it is necessary, but it suffices to write that Blood is the principle, the only principle, and by this way "pure blood" exists and that it becomes by the Law the property of the Aryans, so that everything flows from it.

In a same method, it is posited that Les hommes sont nés libres et égaux "men are born free and equal"(Déclarations des droits de l’Homme et du Citoyen, France, 1789), this is no more true. This is all the less true as half the men are women. But this is likewise posed in Law. And of this equality and freedom in Law, everything flows.
Simply from this dogmatic system, comes democracy, and the protection of the weak. While from the first dogmatic system came tyranny, and the death of all.
We can, therefore, put to Nazi Law a very critical moral or political judgment, but not deny it constitutes a normative and powerful and new legal system.

III. THE PART OF THE "INTELLECTUALS" IN A SYSTEM WHICH TAKES AS BACKBONE THE ABSOLUTE PREDOMINANCE OF AN IMAGINARY NATURE

In his book written in French and publishied in 2017,La révolution culturelle nazie (Nazi Cultural Revolution), Johann Chapoutot states that Nazism not only constituted a cosmology, a general conception of the functioning of the world, a universal and universalizable conceptiono, but also a conception which constituted a revolution ".

He points out that this revolution has gone unnoticed although Nazism has nevertheless operated a break in the general vision of the world, definition as a "revolution".

It shows the motor of this revolution, namely the predominance of the Nature, against which nothing can be done, which is necessarily just (since Nature can not want evil), which is necessarily powerful (the blind force of the fact) and that it is therefore necessary to accompany, for it is stupid to struggle in vain against the fate of the movement of the planets. The "culture" therefore consists in removing the rubbish of old varnish to regain this natural and fatal power.

He shows the artisans of this revolution, namely the intellectuals, since only people highly educated in knowledge are legitimate to demonstrate that this is only an house of cards and that it must be made transparent in order to appears the splendid Nature, whose power was hindered by a false civilization destined by some malignant to hinder its natural power, especially of selection. The natural beauty, for example that of the bodies, must finally find its place.

When one reads these two works, as a lawyer, one can only think of the law professor Carl Schmitt, who joined the Nazi party in 1933 and contributed greatly to thinking about the Nazi Law. Some continue to study his intellectual word today and admire his thought, built on the idea that Law must be thought from the legal power, reflecting the power of political will. American law, which starts from enforcement, is not far from it. To him was opposed Kelsen who constructed the more abstract and procedural system of hierarchy of norms.

Johann Chapoutot shows that educated people and masters of their technical knowledge have actively contributed to the construction of this new system of thought that has disrupted the general vision of the world, which led to the elimination of a large number of human beings who had no place there (because they did not have "good blood", because they were not "handsome", etc.), without finding fault with it, or even perceiving it.

It is very interesting to listen (in French) to the interview with the author about what an intellectual was then, demonstrating that "intellectuals" contributed to building the Nazi system. He says that today they would still have educated minds, especially academics, to contribute to the construction of such coherent, beautiful and powerful thought.

In this interview, the author shows how intolerable it is to him to work permanently in this Nazi thought, an atrocious thought as a true thought. To consider it as "delirious" being a way of protecting oneself; to consider Nazi thought as true and solid is therefore a pain.

IV. ARE WE TODAY FACE TO  A NEW CULTURAL REVOLUTION, WHOSE FOUNDATION IS THE ASSOCIATION OF THE FATALITY OF GENERAL FACTS AND THE POWER OF SPECIAL WILLS ?


The question that must be asked is: are we living the same thing?

WHAT WE HAVE NOT SEEN IN THE MECHANISM OF CULTURAL REVOLUTION, IN PARTICULAR LEGAL, NAZI

That would be possible, it would be terrible, our responsibility would then be very great, especially for those of us who are "intellectuals, especially professors of law.

If one retains the definition of what is a "cultural revolution", a classical definition such as Kuhn gave it, it is an explanatory view of the world in the way it operates on the basis of new "paradigms". Galileo by the paradigm of the movement of the planets carried out a scientific revolution. It is therefore the observers who, for new words and new hypotheses of functioning that they put on the world, are revolutionizing it. Thus, the "intellectuals", because they invent words and theories, bring materials that allow the transformations of the world by the projection that they give of it.

And we did not see it.

Are we going to live the same thing?

Making the analogical link with the Nazi, its general dogmatic thinking and especially its legal system, he argues that we are experiencing a sort of cultural revolution (he does not use that term, but he would accept it ) through the concept of 'Total Market'.

One can read the proof that Alain Supio makes it in successive works: The spirit of Philadelphia: Social Justice v/ the Total Market  (2012), La gouvernance par les nombres (The governance by the numbers) (2015) or Prendre la responsabilité au sérieux (Take the responsibility seriously) (2015).

He asks that the Law finds its minds and disengages itself from this revolution which consists of erasing people from the space in which human beings live.

But the new "paradigm" is that of "consent." It would be necessary, but it would be enough for a human being to consent, and everything would be said, since Law had only the task of giving full effect to this consent, by which the human being could dispose entirely of himself. Including to give itself entirely to others, by giving, by contract, in a bilateral relationship, in the terms of which the States would have nothing to do, their only function being now to ensure the legal security of the consent of the parties.

This new paradigm which notably allows not only the fact of slavery but also a legal system of slavery as an ordinary relationship is under construction. The intellectuals are actively involved.