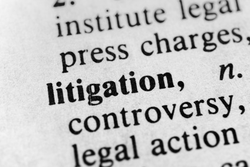 The procedural safeguards enjoyed by a person whose situation may be affected by a future judgment are principally the right to bring proceedings before the court, the rights of the defense and the benefit of the contradictory principle.

The legal action was for a long time considered as a "power", that is to say, a mechanism inserted in the organization of the judicial institution, since it was by this act of seizure, access by which the person enters the judicial machine, through the latter starts up.

But in particular since the work of René Cassin and Henri Motulsky, legal proceedings are considered as a subjective right, that is to say, a prerogative of any person to ask a judge to rule on the claim that the plaintiff articulates in an allegation, that is a story mixing the fact and the law in a building and on which he asks the judge to give an answer, such as the cancellation of an acte, or the award of damages, or the refusal to convict him (because the defense is also the exercise of this right of action).

The legal action is now recognized as a "right of action", the nature of which is independent of the application made to the court, a subjective procedural right which doubles the substantive subjective right (eg the right to reparation) and ensures the effectiveness of the latter but which is autonomous of it. This autonomy and this uniqueness in contrast with the variety of the sort of disputes (civil, criminal or administrative) makes the right of action a pillar of the "Procedural Law" on which a part of European and Constitutional Law are built. In fact, Constitutional Law in Europe is essentially constituted by procedural principles (rights of defense, impartiality, right of action), since the principle of non bis in idem is only an expression of the right of action. Non bis in idem is a prohibition of double judgment for the same fact which does not prohibit a double trigger of the action (and criminal, civil and administrative). This unified due process of Law has helped to diminish the once radical separation between criminal law, administrative law and even civil law, which are clearly separated from one another in the traditional construction of legal systems and which converge today in the Regulatory and Compliance Law.

Moreover, the subjective right of action is a human right and one of the most important. Indeed, it is "the right to the judge" because by its exercise the person obliges a judge to answer him, that is to say to listen to his claim (the contradictory resulting therefore from the exercise of the right of action ).

Thus the right of action appears to be the property of the person, of the litigant, of the "party". This is why the attribution by the law of the power for the Regulators to seize itself, which is understood by reason of the efficiency of the process, poses difficulty from the moment that this constitutes the regulatory body in "judge and party", since the Regulator is in criminal matters regarded as a court, and that the cumulation of the qualification of court and of the quality of party is a consubstantial infringement of the principle of impartiality. In the same way, the obligation that Compliance Law creates for operators to judge themselves obliges them to a similar duplication which poses many procedural difficulties, notably in internal investigations.

There is a classical distinction between public action, which is carried out by the public prosecutor, by which the public prosecutor calls for protection of the general interest and private action by a person or an enterprise, which seeks to satisfy its legitimate private interest. The existence of this legitimate interest is sufficient for the person to exercise his or her procedural right of action.

In the first place, the person could not claim the general interest because he or she was not an agent of the State and organizations such as associations or other non-governmental organizations pursued a collective interest, which could not be confused with the general interest. This procedural principle according to which "no one pleads by prosecutor" is today outdated. Indeed, and for the sake of efficiency, Law admits that persons act in order that the rule of law may apply to subjects who, without such action, would not be accountable. By this procedural use of the theory of incentives, because the one who acts is rewarded while and because he or she serves the general interest, concretizing the rule of law and contributing to produce a disciplinary effect on a sector and powerful operators, procedural law is transformed by the economic analysis of the law. The US mechanism of the class action was imported into France by a recent law of 2014 on "group action" (rather restrictive) but this "collective action" , on the Canadian model, continues not to be accepted in the European Union , Even if the European Commission is working to promote the mechanisms of private enforcement, participating in the same idea.

Secondly, it may happen that the law requires the person not only must have a "legitimate interest in acting" but also must have a special quality to act. This is particularly true of the various corporate officers within the operators. For the sake of efficiency, the legal system tends to distribute new "qualities to act" even though there is not necessarily an interest, for example in the new system of whistleblowers, which can act even there is no apparent interest.