This article has been written in French 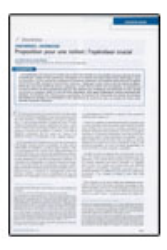 The market is conceived as having two kinds of actors: operators and regulators. But we can suggest a third term: the crucial operator. This notion, proposed here, assumes that the sector cannot function without it. It could be a network manager or a systemic company, the failure of which produces a domino effect, or a structure that maintains a system like the financial market companies. These kinds of "second-tier regulators" then have more rights and more obligations. They are either holders of essential infrastructure, or bearer of capital innovation, or centralize system risks. The regulatory systems should be rethought by integrating these "crucial operators".

Read the article summary below.

Competition law neutralizes economic agents who act on the markets, in particular by the rule of capital neutrality. Thus, the company is a transparent legal concept, which erases the specificities of organizations. Public enterprises are therefore only considered as an enterprise and the notion of "national champion" is rejected.

To escape this neutrality, without falling into the arbitrariness of the States against which competition law rightly fights, there is great interest and relevance in developing the concept of crucial operator.

The idea of ​​a crucial operator is to no longer think of it in a neutral way, not in relation to its capital or those who govern it, but in relation to its market behavior. In fact, cruciality can be defined as the quality of an organization which puts in its dependence the efficiency and the good functioning of other organizations. In this, cruciality is the opposite of competition, which postulates that the company not only does not depend on others but also will seek by nature to harm it by appropriating demand to the detriment of its competitors. But it may happen that the market cannot be satisfied with the aggressive mobility that is competition and supposes the stability and support of others operated by the crucial operator.

This is so when the operator is the manager of an essential infrastructure since the other operators depend on it. This is also the case when the operator is the bearer of market innovation, which in particular justifies access rights under essential facilities or agreements to produce research. The third case is when the operator carries the risks of the system, which explains why banks and financial institutions are most often crucial operators in that they carry the systemic risks of the banking and financial system. It is thus measured that the public or private character does not interfere in the qualification of crucial operator any more than the monopolistic character or not of the operator considered.

The consequences of such a qualification as a crucial operator is that the operator must have more obligations than an ordinary operator. Thus, the infrastructure manager has the obligation to open it to third parties, even though control usually generates a power of exclusion. Similarly, financial or insurance institutions, because they must prevent risks, will be obliged by specific prudential standards. But the crucial nature of the operator gives him rights but also powers. This is how market companies, operators of private law who hold the places, have a disciplinary power of exclusion that some have compared to the power of the State.

What is more, the crucial operator then appears to be a "second tier" regulator. Indeed, according to a pyramid figure, ordinary operators are subject to the disciplinary power of crucial operators who themselves are governed by public regulators, who are the first rank regulators. This quality of second-level regulator obliges the operator to behave towards his competitors with the same virtue as that which characterizes the regulator and first of all impartiality. This is the case with non-discrimination in accessing the network from its own competitors. In addition, a regulator must be accountable and behave in a transparent manner, while the ordinary operator is not subject to this principle, since competition law does not require transparency of structures and behavior. This link between regulation and governance clearly applies to financial operators, but it is also observed with regard to network operators.

We thus measure that if positive law, giving form by a last effort of vocabulary to established rules, recognized the existence of the notion of crucial operator, it would better identify this intermediate category between the ordinary operator and the regulator, because the crucial operator is a company, entering into the game of supply and demand but it also supports the stable structure of the market and the stability of this market, which is not the usual aim of companies.